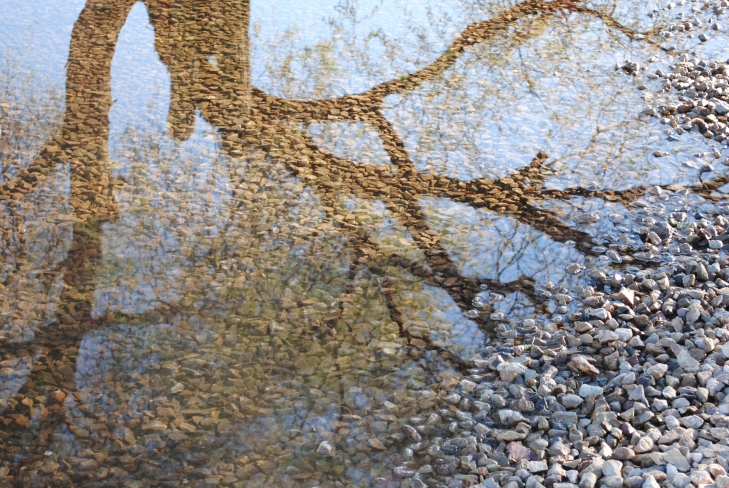 My faith is small, or maybe the way I live my life is small, and ordinary. In small things I find God: his presence, his provision, his orchestration, his glory, his love.

When I recognize God in my life, it usually comes in the form of just enough rice or just enough flour, or sun breaking through cloud before sunset after several days of depressing grey, or a poem just right for the moment, or the colour of a pair of mittens matching a child’s snowsuit I’ve never seen before, or the heart shape of trembling aspen leaves strewn along a creekside pathway. God is in the shade of orange kelp on sand. God is in a small child spinning in a pink tutu. God is. I have come to notice God in all the details. 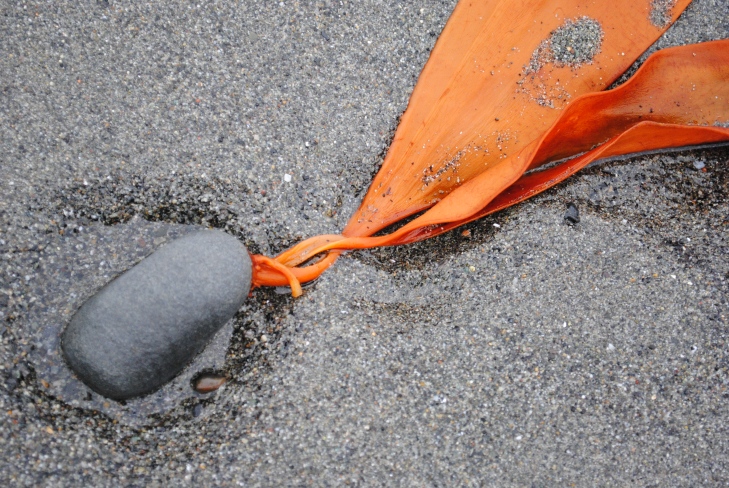 I believe my Grandfather taught me to see God in this way. When I was very young, Grandpa walked me around his garden on summer evenings, our hands clasped behind our backs, each flowering shrub like an offering, a miracle he had discovered and wanted me to see. “Look at that” he would say, gazing deep into the centre of a Hibiscus bloom “have you ever seen a design like that?” “Rosa, Spiraea, Forsythia, Weigela, Hydrangea…” he repeated over and over until I knew them. Name these plants, see these small miracles. He was the same about song birds. His curiosity and joy of creation spilled over and captivated me. Little things. Seeing small. Seeing God.

Not that I don’t dream big. I love to dream and drink wine and talk about ideas. Not that I don’t dive into big things, because I do. But the dreams and projects and ideas must quickly settle into a series of little steps to realize the bigger picture. And maybe it’s not the big thing that matters as much as the little things that take place along the way. Usually, that means the people, conversations, conflicts, resolutions, and love. Each little interaction, each small encounter, mattering so much more than any end result. God is in the details of people too, I find.

My faith is small, and wildflower and honey bee sized. My faith is my search for tracks to hang gallery hardware on the wall and finding them no more and no less than I needed, and my faith is the width of several old doors that now cover windows, in exactly the right width for the openings. My faith is sometimes the size of these three words…”I don’t know”. My faith is the sound of my daughter’s joy that she drove stick shift for the first time over the winding road to the Pacific Rim, and back. Safe. Back. My faith is light and shadow, juxtaposition of words on a sign against audaciousness of spring blooms. God is in each one of these small and sacred things.

My faith is small.

My faith is small, and simple.

My faith is small, and ordinary.

446. judgement, jealousy,  justification… mine to own, my sinful nature to recognize, mine to gain freedom from. Naming them, and asking God to forgive. Again. Often. Again.

447. finding a jewel beside the bench by the lake, recognizing the metaphor in the single cubic zirconia in a cheap, rusted setting… seeing myself as tarnished, vintage, yet priceless in God’s sight.

448. that behind the heavy lowness of grey clouds, vapour that we cannot grasp or touch or break through often for weeks at a time, there is a glory of sun and warmth and potential for growth, within a vast blue of sky. That this is a season of waiting, perseverance, rest… and more.

449. wind crisp against my face, icing my skin, and the rush glow in my cheeks when I get back inside the warmth, teens and dog welcoming me home.

450. steam rising from a cup of hot coffee with milk and sugar, the warmth expanding.

452. that God can be found outside the walls of the church.

453. son studying hard for his finals.

454. finding there is unity in marriage and creating new ways to get there.

455. deer nibbling shoots on orchard trees… following their tracks along my street.

456. iris poking up out of the snow as the mercury announces the possibility of Spring.

457. open mics, music and poetry… blessing God for creativity in all its forms.

458. the profound simplicity of my husbands words, “just breathe.”

460. remembering the naming of the gifts. Re-visiting this way of gratefulness.

461. that this world and these people are wonderland, the fullness of God’s glory, the echo of his voice, that my eyes become dull and my heart crusted over and my ears deaf, and I need to take time to remember all he has given.

That confession and turning is the restart button… that God’s grace is always waiting… and action always follows.

I was given this by a friend who thought I might have a chuckle at it. I’m not certain where it originates from, but I think you might like it. And maybe your kids might?

Old fashioned thinking? Maybe some of it is, or maybe it is just as relevant to parenting today? Just saying…

I walk out; I see something, some event that would otherwise have been utterly missed and lost; or something sees me, some enormous power brushes me with its clean wing, and I resound like a beaten bell. I am an explorer, then, and I am also a stalker, or the instrument of the hunt itself. I am the arrow shaft, carved along my length by unexpected lights and gashes from the very sky, and this book is the straying trail of blood.

I am graced again today by my friend Robert Rife, and his ‘modern parable of redemption’. Enjoy. 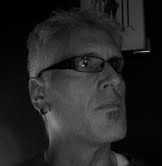 “The Woman At the Mart”

Today, she wasn’t sitting in her usual place by the window slurping down Budweisers and waiting for “callers”.  No, today was Wednesday.  It was her day to go “to the burbs” and see how the other half lived.  She liked to shop in those big, fancy grocery stores with all those pretty people that would never frequent her regular haunts.  She had a whiskey voice, painted her make-up on with brush and roller and donned leather and spandex like a uniform – the requirements of her station.  It was rare for anyone to ever talk to her when she went there.  Indeed, it was more common to endure the leering gestures of young ne’er-do-wells on a dare. Or maybe the GAP outfitted hard-bodies who only ever looked at her through their peripheral vision long enough to make her feel the sting of their unspoken judgments.

His appearance was that of anyone she might have met during any other visit to this bastion of pretension, role-playing, and economic benefit.  He wore no brand names that she could see and, for the most part, was indistinguishable from his rather astonished group of buddies, she counted 12, who pretended to be shopping nearby.  He politely asked her for the time.  She rolled her eyes and told him she never wore a watch.  Her instinctive reaction was that this guy was merely sizing her up like every other guy she’d ever met.  But something told her to stay and talk with him.  His eyes bespoke a certain gentleness and, contrary to the norm, never left hers.

“Funny, all this food around and so many hungry souls,” he said.

“Yeah, I watch the news.  You’re not one of them ‘bleedin’ heart’ types who gets sucked in by the skinny, little African kids on TV, are ya?”

“Well, actually I was speaking in a more…metaphorical sense.  I mean, people keep coming back again and again to this place, filling carts to overflowing with that which can never ultimately satisfy.”

“Sure.  But it’s what they don’t eat that keeps them hungry.”

She couldn’t decide whether she was annoyed enough at his rather enigmatic statements or if she was intrigued enough to hang around for more.  She decided to take the plunge.

“What do you mean?  Eatin’s simple enough.  Ya eat, ya get hungry, ya buy more food.”

“True enough, but I can give you whole storage bins of food that will keep you going forever.”

“Go get your husband and we’ll chat some more.”

She gazed at him incredulously.

“Well, who was that guy who dumped you in the alley last week after he pretended to have good intentions?  You’re lucky to be alive.”

“Uuuh… how’d you know about that?”

“You’d be surprised what I know about you.”

Normally a statement so bold and presumptuous would have frightened her to death.  Instead she stood mesmerized with curiousity.

I wonder how many “women at the Mart” we, and Christ by association, pass by every day.  How many such folks, who are branded as social losers whether spoken or implied, show up at our door each week?  How do such people find Jesus through our language, postures, and “guise” of faith?

Picture the following: the second generation drug user, who has never been inside any church building, who not only doesn’t own a Bible but has never even seen one; the angry youth with self-imposed atheism and hatred of the establishment, especially religious, who stumbles upon us by sheer “accident” looking for the very answers she neither wants nor understands; the desperately bedraggled single Mom who, by incredible force of will against her body’s weary protests, pulls all three of her unimpressed children out of bed on Sunday morning to head to the church she has driven by dozens of times but who, today, inexplicably feels the need to attend; the fifty-one year old executive, let go by a boss half his age through “corporate down-sizing”, forced with the decision to take a 50% cut in pay or face entirely changing the only career he has ever known.  All that in a marketplace environment which worships “young and fresh”, disdaining whatever experience he has painstakingly accumulated over his 30 year career; the 15 year old pastor’s daughter whose quest for attention and a “cool” testimony becomes pregnant casting her family’s reputation and ministry into disrepute and chaos; the High School drop out whose body bruises never have enough time to heal until more appear at the hands of an alcoholic father; the drug addicted mother whose “street time” is only interrupted long enough for her to disappear for days at a time to some crack house where her personal esteem can disappear even more….