Something I wrote a couple of years ago seems to fit today. A grey winter’s day with a feeling of heaviness, continued concern about the health of my dog, but also expectation that God can step in at any time and change things. 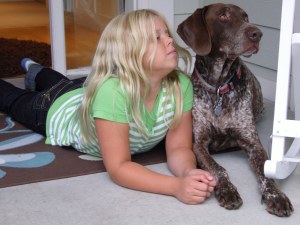 “Enough blue to make a shirt,” is one of many odd yet endearing sayings that I carry around with me, thanks to my British family heritage.   This particular saying was used by my Grandmother Christina Cook, and I learned that it meant the sky showed some promise of opening up to a better day.  Grandma would say this when the sky was cloudy but showed just a hint of blue, just enough to plan with, or consider doing something with, that day.   It usually meant an activity like a picnic, or a fishing trip to the Grande River, or a visit to my Uncle’s dairy barn next door.

I walked down to Sarson’s beach on Friday and stood by the shoreline in the quieted park, tourists gone, boats winterized, and not even a kayak breaking the perfect, clear surface of our lake.  I guess you could qualify the day as mostly cloudy, and chilly enough to wish I had worn gloves.  Standing there, looking across the mirrored expanse of Lake Okanagan I saw light.  It took me a moment to ‘see’ that the light was glowing because, even though I wasn’t aware of it, somewhere there was a break in the clouds.

I looked up and searched until I found the tiny piece of blue that was responsible for the glowing land on the other side.  There it was, in the words of my maternal grandmother, “enough blue to make a shirt” or, in this case, enough blue to create a patch of sunshine on the west side near Peachland.  How interesting, I thought.  It didn’t last long.  Even as I watched, the sunlight faded, and then another patch of light illuminated a different piece of land some distance away.

Today there is no blue, just grey clouds hanging low over the valley and blessing us with the occasional sprinkling of rain.  I haven’t even ventured outside yet and it’s almost lunch time.  I feel rather melancholy, weather and Mozart playing on my mind.  But what I feel is not depression, it’s contentment to wait.  My spirits are quieted by the knowledge that there may be blue tomorrow or the next day.  That memory of the glimpse of blue on Friday is carried inside me.  I saw blue, and it’s still there behind the clouds.

Tomorrow may be sunny or cloudy or something in-between.  What I carry into tomorrow is ‘enough blue to make a shirt’… and it’s just enough for me to hope.”